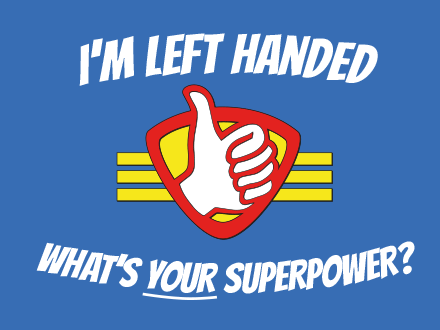 Before I get into it: so I know this isn’t technically “fandom” but I’ll be honest, I was running out of time to write this post when I came across a video of 90 degree scissors. I found myself completely freaking out about the possibilities these would have for left-handed people and yes, obsessing over scissors (again), which gave me the idea for the post.

If you know a left-handed person, the chances are you’ve seen them struggle with things that are incredibly simple to you – opening tins, using scissors, even simply writing. In a world designed by and for right-handed people, lefties like me are left (get it?) to struggle and adapt to what in our eyes is a world completely in reverse.

Many left-handed people are incredibly proud of this fact, myself included. Regardless of how happy we are to be different, however, we all have to adapt and face the same struggles. Of course not everyone is the same, but I think it’s safe to say that most left-handed people I know also find themselves obsessing over the things in this list, at least a little bit.

Writing is the most defining difference between left and right-handed people. It is also one of the first difficulties left handed children will face – or, at least those learning to write in languages read from left to right, at least. It is much easier for right-handed people to write this way. They write away from their bodies, pulling the pen towards them. Left-handed people, however, have to push the pen away, dragging it and putting a strain on the hand that right-handed people don’t experience. This gets even more difficult when sat in a classroom with right handed people on your left – elbowing that guy you’ve fancied all year is not a good seduction tactic, trust me!

Writing can be incredibly hard to master, and can become a huge stress and long lasting obsession for left-handed people. Physically it is uncomfortable at best and painful at worse, and mentally it can be quite confusing – when I was learning to write I found it easier and more natural to write backwards; you’d need a mirror to read my first schoolbook!

There are several “left-handed” pens and pens designed to help with handwriting out there, and after a while finding the right (lol) pens becomes a bit of an obsession for many left-handers. I think most have tried specifically left handed pens (the infamous “banana pen” comes to mind) however these can be pricey and not always practical. In recent years I have resigned myself to normal biros, but my personal favourite “left-handed” pen is the Yoropen. It is designed so that the hand doesn’t cover the writing. Even if we’re not looking at “special” pens, you can bet that a left-handed person will try and deduct how long they’ll be able to write with a pen and how much they’ll smudge it before they use it.

If you see a left-handed person stooped over their paper, arm hooked over the top and little finger slowly getting drenched in ink, we’re probably not hiding it from you and probably aren’t that engrossed – we just don’t want to have to copy it up another 6 times before it’s legible.

Scissors are another big classroom struggle for leftie children, and one that stays with us throughout our lives. Right handed scissors are incredibly difficult – we have to turn them upside down, posing a problem if the handles are moulded, and the leaving the blades in the wrong position. Not only does the paper tend to bunch and rip, we can’t see what we’re cutting. Of course we learn to manage, but this can again be painful. If you’re left-handed and still in school, don’t be afraid to ask for left-handed scissors, especially if it’s a long task; the cramps aren’t worth it!

Again, this links to writing. When trying to write in one, the rings of the binder get directly in the way of the left arm. In order to write in the ringbinder, lefties would have to leave several inches, wasting the paper. Of course we could just take the paper out, but it sort of defeats the object of the ringbinder.

If you ever go stationery shopping with a left-handed person, be prepared to spend hours looking for left-handed scissors, good pens and hearing them moan about their love-hate relationship with ring binders.

Bane. Of. My. Life. There is something very embarrassing about a grown woman having to ask her baby brother to open tins for her.  I don’t really know the specifics as to why can openers are so difficult for lefties, although I imagine it’s the same as scissors in that we turn them upside down, rendering the blade less effective. Using a can opener in reverse often results in a blood covered, disgruntled leftie throwing cans at the wall. Okay, maybe it’s not that dramatic, but I have suffered at the hands of a can of Heinz baked beans many a time!

This applies to both the statement and the online shop. It’s rare that we find things that are actually built with our hands and abilities in mind, so it’s kind of a big deal to us when we do. Left-handed vegetable peeler? Kitchenware goals. Anything Left Handed is an entire store dedicated to these things, what could be better?!

Okay, so obsessed may be an exaggeration, but all of these things are a lot more important to left-handed people than right-handed people. We have to adapt and learn to work with things that don’t want to work with us – it’s understandable that these struggles will become a main focus in our lives! I’m proud to be left-handed (if you couldn’t tell), and although we can’t always do the most basic things, I’d say we’re pretty great.

Are you left-handed? Did I miss anything out? Let me know your thoughts!

None of the companies/brands I’ve mentioned here are paying me, these are purely my personal opinions and experiences.